I am an animal lover. I would have an animal sanctuary in my backyard if I could afford it. The thought of any creature suffering is more than I can handle so I constantly go out of my way to save things. I have a yoghurt container in the mudroom for releasing insects back into the wild. I drive people nuts sometimes with all my saving. I just can’t help it, that’s me! So when I accidentally stepped on a toad who somehow got himself in the gazebo, it was pretty devastating. He was a large toad and I really stepped on him. At first, I thought I’d killed him but he was alive albeit looking rough. I put him in a safe spot on some wet leaves where I could keep an eye on him. It seemed hopeless. I won’t go into details but his right eye was damaged & he was bleeding. My family checked on him for three or four days. We offered bugs & it rained. He just sat there but he was alive.
Did you know that the American Toad (Anaxyrus americanus)  have poison glands in the skin that reduce their susceptibility to predators. A dog that picks up a toad will drop it and may foam at the mouth but will not be hurt. They are cool cats who aren’t afraid of humans, cats or dogs. If only they ate caterpillars! I actually saved a huge toad from a black rat snake a few weeks before. I normally wouldn’t interfere but he was obviously an old toad & the snake just had him by the foot. Ok, I interfered! Back to our toad.
One day, Toad was gone! His cozy little nest in the leaves was empty. I tried to tell myself that he had recovered but I found it difficult to believe. We rejoiced but felt a little sad that he wasn’t around anymore until… today! Our dog Reggie was sniffing something by the woodpile and when I looked around I realized it was a toad. We have a lot of toads around so it didn’t occur to me that this could be Toad. I knelt down & took a good look and yes I know what you’re thinking… don’t all toads look the same roughly? But this toad had a cloudy right eye and some white bumpy/ mossy looking stuff on his side. It was Toad and it seems like he’s ok. We talked for a moment and I took the photo so I could show the fam. It was like someone put a soft bandaid on my soul and it felt good.
Garden update- everything is growing and looking fantastic.  Our crazy melon idea (see first blog entry) is working perfectly and there are quite a few melons on the vines already. We are very lucky & I am thankful. 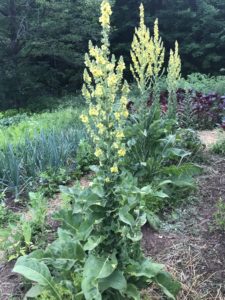 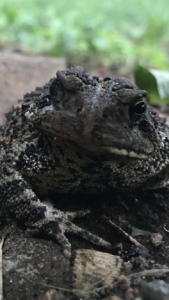 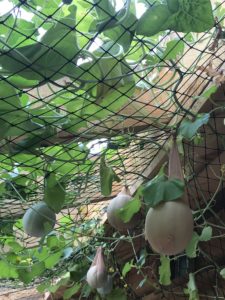