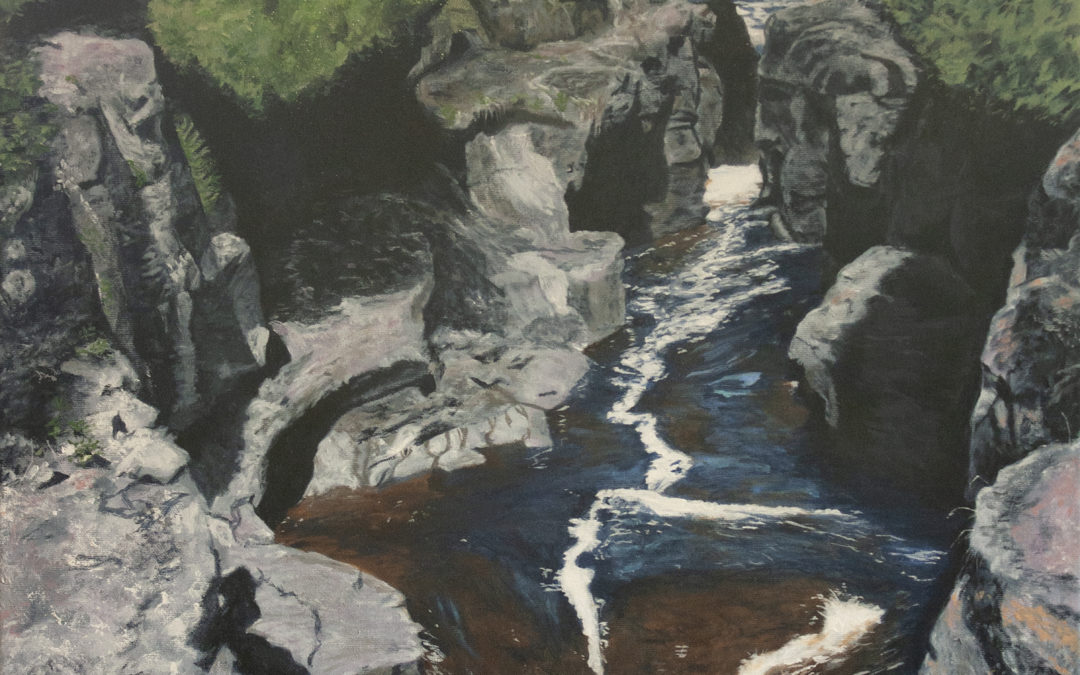 Catherine Orfald’s artwork is on display at the library until the end of March 2021.

I had the honour to be selected for the second annual CPAWS-OV DRAW retreat in 2018. I experienced first-hand a portion of the watershed around les Grandes Chutes on the Dumoine River in Québec and painted en plein air. It was a wonderful opportunity to share the beauty and power of the landscape with other inspired artists and people who care deeply about the environment and its protection.
CPAWS OV works towards the protection of this beautiful area surrounding the Dumoine River. I support CPAWS OV’s position the protected area be strong enough to ensure there are no industrial activities, such as logging, mining, or hydro-electric development, but flexible enough to allow for continued recreational access. Naturally, Indigenous access should also be unfettered.
Along with about 20 other artists, I spent five days camping along the shore of Robinson Lake and working on my art.
Robinson Lake is quite a contrast from the excitement at the Chutes. It was usually very calm, peaceful, and often shrouded in fog. I worked there a couple times during the retreat. Later in the studio, I finished this painting “Foggy Lake Robinson”. The image is from early in the morning before the sun burned off the fog.
I was among the group of artists selected for the 2020 retreat. Unfortunately, the retreat and two planned DRAW exhibits in April and May were cancelled. A virtual exhibit has been set up instead.
I completed the 24×36 painting “Three Painters at the Dumoine” in the studio. It was a wonderful way to recall the DRAW retreat. To create the painting, I used several images I took of three painters working at the Grand Chutes bridge over the Dumoine River.
Painting the scene recalled the roar of the river to me. It’s almost a deafening sound. You can hear it in this video I took standing on the bridge.
20% of the sale price of either of the images inspired by the Dumoine will be donated to CPAWS-OV, in addition to the 10% donated to the library.To learn more about CPAWS-OV and DRAW, visit their website. There is a virtual exhibit and sales of the artists’ work on right now! 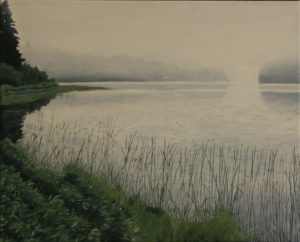 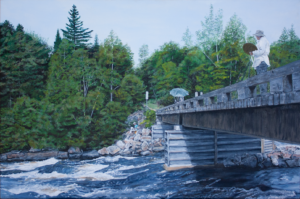